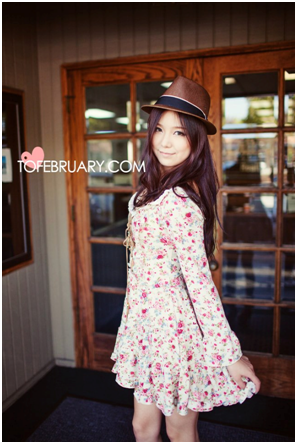 Cara Tse, a senior at Cal State Fullerton studying Public Relations, has followed through with her love for Asian fashion by creating her own online boutique called ToFebruary.

“I created it when I came back on a trip from Hong Kong. I realized I wouldn’t wear most of what I purchased and decided to sell it online,” Tse shared in an interview.

Her boutique had its origins on Soompi’s Selling and Trading Forum, a Korean pop culture website consisting of several public forums, where the South Korean pop group DBSK sparked her interest in Korean entertainment and culture.

At 18, Tse moved her boutique to her own domain, ToFebruary, but did not devote herself to marketing and branding until about two years after the website’s launch. Tse’s online boutique now has its own website developer, Idy Chiu, who maintains the website and creates its graphics.

So far, Tse has found great success with ToFebruary in being a giveaway sponsor on Allkpop, a Korean blog providing K-pop gossip and news. To date, he site has awarded several Allkpop winners with k-pop collectibles and fashion items.

The 22 year-old is hoping to expand and build her customer base and hopes that “one day ToFebruary will become someone’s first choice when they think of purchasing some cute and dainty clothes or accessories.”