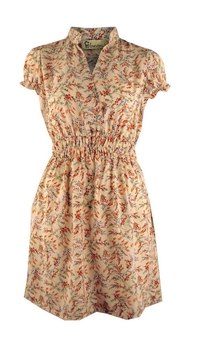 Us Weekly reported on March 2 that the Duchess of Cambridge, Kate Middleton, has purchased a high-street maternity dress at Topshop for just $55.

Since wearing a royal blue Issa wrap dress to her 2010 engagement to Prince William, Kate Middleton’s style has attracted media coverage and attention from women worldwide. The Issa dress sold out within 24 hours, and the brand has re-released the dress twice, including a maternity version.

Several other pieces she has worn, especially those from “high street” brands with price tags that are affordable for the general public, have also sold out.

Middleton’s new outfit is U.K.-based clothing brand Lovestruck’s “Deirdre” dress, which is tan with a delicate red and green floral print, a mandarin collar, a crossover neckline and an elastic waistband.

“It’s so exciting that the Duchess of Cambridge bought one of my designs,” Lovestruck designer Erika Shaw told Us Weekly. “I think it’s great that Kate wears high street brands.”

In Britain, the term “high street” is similar to the term “main street” in America. According to royal family observer Tom Sykes of the Daily Beast, “former PR girl Kate seems quite determined to telegraph a very specific message to her future subjects via her clothing choices: ‘I’m normal.’”

The Duchess is not only turning heads on her side of the Atlantic Ocean.  “I really want to buy the dress now,” American student Sujin Jung, 18, said. “It is really pretty, and who wouldn’t want something the Duchess of Cambridge has worn?”

The 31-year-old Duchess of Cambridge is expecting her first child with Prince William, the Duke of Cambridge, this July.