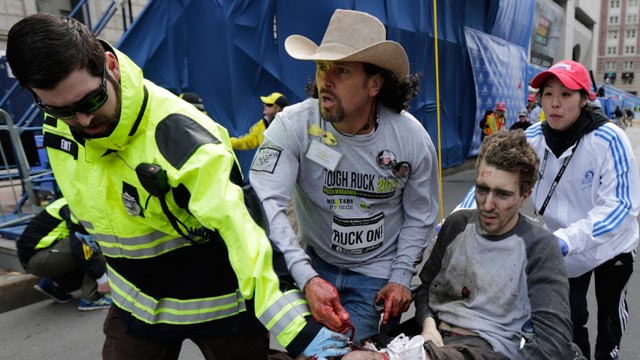 The Boston marathon bombers may have been caught, but news coverage of their acts continues to perpetuate an alarming phenomenon in American journalism: the sensationalization and removal of the human factor in sensitive and deeply tragic events.

Last week’s attack on the Boston Marathon, which killed three, injured 264, and led to a violent manhunt with one policeman dead, is yet another senseless act of horror in a string of violent outbursts across the nation.

The following weeks promise more information on the attack, such as motives, but answers aren’t enough to patch the lives of hundreds of victims who now have to cope with crippling injuries and traumatic memories.

Although some people, like LACES history teacher Jose Rojas believe that “…the media should focus… more on highlighting terrorists as villains,” such attention actually contributes to the culpability of the media in promoting acts of violence.

Violent attacks in the United States are treated more as carnivals than tragedies. Media outlets turn investigative journalism into a twisted game of Clue, hunting down details and suspects for a captivated, thrilled audience. Although this certainly isn’t a new phenomenon, with instances of “thriller” journalism dating back to the 1960s, its integration into mainstream media as a legitimate method of selling a story is accelerating rapidly through advances in communication like Twitter.

Many news sources in the United States broadcast the same horrifying images over and over again, giving overwhelming publicity to attacks, but more importantly, the attackers. This, coupled with extensive details about the attack, leaves a dangerous window of opportunity for other disgruntled radicals, who now have a blueprint, a motive and a guarantee of attention and “fame.”

As University of Alabama professor of criminal justice Adam Lankford argues in his book The Myth of Martyrdom, the desire to justify personal shortcomings through killing and lasting infamy is a major motive in acts of terror.

“I think our media should take a new angle on national tragedies” says Orr Shauly, a senior at LACES. “Instead of focusing on the suspects [they] should report more on local heroes such as police officers and bystanders, as well as steps being taken to recover.”

Although heartwarming stories about victims and heroes are widespread, the impression of many Americans seems to be that simply too much attention is given to terrorists, even though others think the media should be more condemning of suspects.

Attacks will only grow deadlier and larger as the media continues to vilify and pillarize such attackers to ridiculous extents. Terrorism should be met with solidarity and support for its victims, not infamy for its perpetrators.

As Dina Parmertor, mother of a student shot by Ohio teen TJ Lane puts it, “After today I refuse to give him a second of my thoughts… He is repulsive. We don’t speak his name and we never will.”