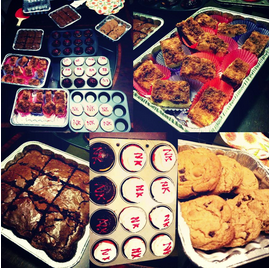 On February 10, Irvine Baptist Church held a bake sale to raise money to build a well in North Korea. The bake sale was part of the larger [NK]-24 project, an effort sponsored by Christian Friends of Korea to raise funds for North Korea and teach “a global awareness of poverty.”

Last year, students from four Irvine churches – Onnuri, Irvine Baptist, Sarang, and Bethel – held a [NK]-24 event. The fasting and fundraising event was intended to help students empathize with North Koreans in need and raise funds on their behalf. In addition, event raised money to build wells in North Korea and alleviate the clean water problem there. The money they collected supported the construction of two wells in North Korea.

“We were so satisfied with the amount of money we made last year,” said Elisa Kim, a junior at Irvine High School. “Now, a large amount of the people in North Korea are enjoying their cup of fresh water.”

For 2013, the churches decided once again to collaborate. According to participants, the bake sale went very well.

“Every student including myself baked goods to sell at church,” said Judy Kim, a senior at Northwood High School. “We sold so many. All the parents were supportive and all my brownies were sold out!”

The parents have been supporting this event by buying baked goods.  “My daughter baked a lot the night before just to sell to the church people,” said Sarah Kim, whose daughter attends Irvine Baptist. “It was hard for her. But, the only thing I can do now is to support her by buying baked goods at church and by making my friends buy the baked goods too.”

“The bake sale was a success,” said Elisa Kim. “So many people supported us. This is a good start.”