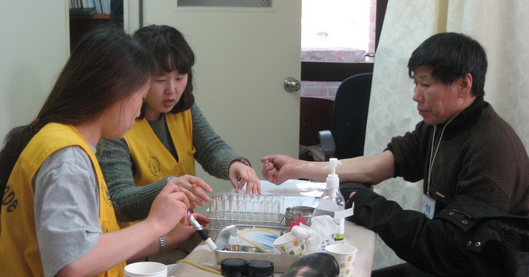 Jeong-dong Church, the first Christian church built in Korea, seems like an ordinary, prestigious church to people walking through the Jeong-dong neighborhood in Seoul. Yet every Sunday, doctors, nurses, college students, and high school students gather inside the church to medically treat thousands of homeless people for free as part of the Agape service.

More than 1,500 homeless people and foreign immigrants wait in line each Sunday for the Agape service, which lasts five hours. Twenty-four doctors who specialize in dermatology, orthopedics, internal medicine, radiology, and more can be found here along with more than 75 high school and college volunteers. More than three thousand immigrant workers and homeless people get treated every Sunday.

Motivated by curiosity of the swarming crowds, I volunteered for more than 40 hours during the summer of 2014. I observed patients desperately in need of medical attention. Because patients were unable to afford medical services, mild conditions curable through simple over-the-counter pills had worsened due to neglect. Common diseases, such as colds, led to pneumonia; benign skin rashes were seriously infected; long term diarrhea was causing constant nausea.

The immigrant workers who came for the Agape services lacked worker’s rights, insurance policies, and money. Even though they had to wait more than three hours in a line outside, barely anyone complained because free medical services were a blessing.

Yoonjin Kim, a fellow volunteer during the Agape program, told me in an interview, “One of the most surprising elements of Agape was undoubtedly the patients themselves.”

“If you’re living near the church, you’re one of the most privileged people living in South Korea,” she explained. However, “this was another world. Can you even imagine suffering from bone infection and misaligned bones because you had to align your broken nose yourself?”

Since 2002, the Agape program has grown into a giant community service. More than half a million patients have participated in the program, and many still come back for treatment. However, the program is threatened by a recent decline in high school and college-aged volunteers.

Pastor and program co-leader Kim Chang Gu told me, “Many people approach me asking if [we] need additional doctors for the program. In fact, we have a surplus of doctors; we don’t even need more than 20 doctors! What we lack are volunteers.”

Pastor Kim continued, “See, the doctors sit in their respective rooms and greet patients that flow in and out continuously. But the cogs working the factory are the volunteers. Many patients are clueless about where to go, what to do when they get there, and how to submit paperwork. Without the volunteers, 100 doctors won’t do anything for the program.”

Volunteers don’t have to have to be medical experts. When I walked into the church and asked for a volunteering opportunity without any prior knowledge, Pastor Kim hugged and thanked me.

The future of the program lies in the hands of volunteers. There are 24 doctors for more than 3,000 patients, so the volunteers are the pillars of the program as they direct, help, and support both the patients and the doctors. If you’re a high school or college student and you’re interested in getting involved, contact chungdong.agape@gmail.com or visit chungdongclinic.onmam.com/.