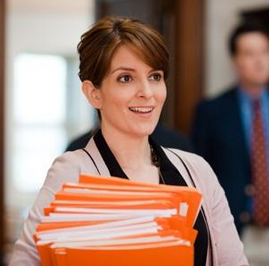 Springtime means one thing for high school seniors and their parents: college admission decisions. Released at this time, Paul Weisz’s Admission may be an attempt at a feel-good comedy to assuage the stings of rejection or waiting list letters. Unfortunately, its overly dramatic and far-fetched approach evokes annoyance, not satisfaction.

Portia Nathan (Tina Fey) has been an admissions officer at Princeton for 16 years. Vying to become dean, she’s incredibly disciplined, professional and work-focused until she meets John

Pressman (Paul Rudd), the director of the alternative New Quest school. He thinks one of his students, an eccentric but brilliant autodidact named Jeremiah (Nat Wolff), may be the son Portia gave up for adoption in college. Driven by maternal guilt, straightlaced Portia begins taking unethical risks to get Jeremiah into his dream school, Princeton. However, Jeremiah has a patchy academic record, no extracurricular activities and is generally not a typical Princeton applicant.

The movie is funny at times. Portia’s vociferously feminist mom (Lily Tomlin) has a few golden lines—“I knew I needed his sperm but not him,” she says, as she explains her status as a single mother to Portia.

But the attempts at comedy are overshadowed by the ludicrousness of it all: Portia, the ultimate goody two-shoes, on the verge of being promoted into what has been her dream job for the past 16 years acts in ways that would surely get her fired outright just to get a teen that may be her son into Princeton. She has no qualms about continuously meeting up with and even beginning a romance with John—wouldn’t such a detailed knowledge of and close personal relationship with the school affect her ability to evaluate Jeremiah’s application impartially? Not that she even tries to.

Also, it’s all too stereotypical. Every single student and parent at the movies’ admissions information session and campus tour is wide-eyed, overeager and dying to know the “secret formula” to get into Princeton. Portia’s long-term boyfriend, Princeton professor Mark (Michael Sheen) is socially awkward and bathed in erudite literature, perpetuating the stereotype that great intellectuals are wonky and “out of touch” with normal people.

“Admission” could have been a decent comedy, but the extremity of the characters and situations it presents makes watching it frustrating.