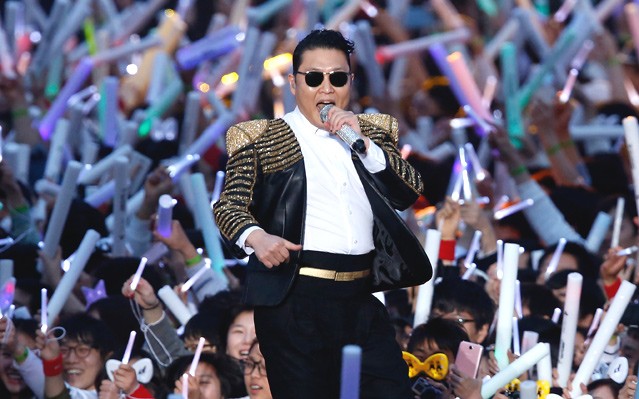 Expectations were high for “Gentleman,” Psy’s follow-up to the most-watched video in the history of Youtube.  Although good in its own right, “Gentleman” is no “Gangnam Style” in universality or catchiness.

The music video begins promisingly. Psy parodies the stereotypical fabulously rich and self-absorbed gentleman, waving his hands and kicking random cones on the street with an entourage of distinguished-looking elderly men who follow him obediently with shopping bags through streets and ostentatious spaces.

Psy parades through Seoul in his signature cheesy attire—a black tuxedo jacket with pave crystals, a black-and-white checkered jacket, and a white sequin jacket—bullying women and children until he meets his match in Ga-In, a member of the popular Korean girl group Brown Eyed Girls.

Korea’s “national MC” Yoo Jae Suk and comedian No Hong Chul reprise their respective roles from “Gangnam Style” as Psy’s rival in cheesiness and the man who does pelvic thrusts with a maniacal smile. Park Myung Soo, Haha and Gil also appear and create some of the funniest moments in the video. It is clear that Psy knows how to entertain.

However, although hilarity certainly played a role, the success of “Gangnam Style” was largely due to its easiness to sing and dance along.

“Gentleman” isn’t as catchy as “Gangnam Style.” The strong beat is there, but the song just doesn’t linger as its predecessor did. Although many similar sounds are repeated throughout the song to make it easy to sing even for non-Koreans, they don’t have the same flow as those in the last single.

Moreover, the lyrics of “Gentleman” are disappointing. Suggestive lines like “Gonna make you wet” take away from the universality of the song. The refrain, “I’m a mother father gentleman,” is questionable—is he trying to allude to the word “motherf****r?” It could just be the singer being silly and singing nonsense, but it is disappointing that the most repeated line in the song is nonsensical.

As for the hip-swaying dance, it fits the arrogant concept of the song, and Psy certainly looks funny doing it. But it is less funny and would definitely require more guts to imitate in public than its predecessor’s “horse dance.”

However, the video is still becoming a phenomenon. Since its release on April 13, “Gentleman” has already broken records. In addition shooting to the No. 1 spot on all major music charts in Korea, it surpassed Justin Beiber’s “Boyfriend” as the video to receive the most views on its release day and received more than 165 million views in its first week.

In contrast, “Gangnam Style” wasn’t predicted to be the viral hit it became; it only began garnering international attention about a month after its release.

Is “Gentleman” worth the hype? Decide for yourself: