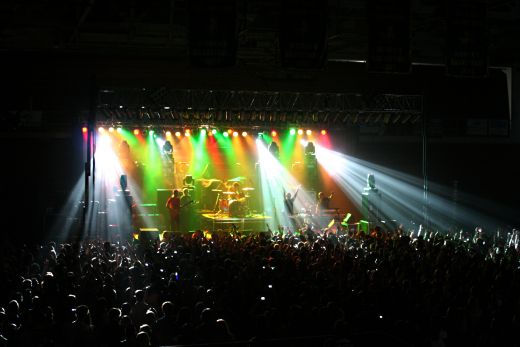 A study presented in April by the House Research Institute revealed that 72 percent of teenagers suffered from reduced hearing ability after attending a female singer’s pop-rock concert.

“Teenagers need to understand a single exposure to loud noise either from a concert or personal listening device ca n lead to hearing loss,” said M. Jennifer Derebery, M.D., who led the inquiry. “With multiple exposures to noise over 85 decibels, the tiny hair cells may stop functioning and the hearing loss may be permanent.”

The hearing loss found after something like a music performance is usually temporary and disappears within 16 to 48 hours. According to the National Institute on Deafness and Other Communication Disorders (NIDCD), however, if the impulse is intense enough, just one incident is enough to permanently damage inner ear hair cells, which convert sound into neurological signals.

To measure the effects of noise exposure, 29 teenagers attended a rock concert, sitting within a two-block seating area 15 to 18 rows from the performance floor to ensure consistent results. Before the performance began, the three researchers accompanying the teens explained the dangers of noise-induced hearing loss to the participants. They also offered foam ear plugs, but only three of the 29 decided to use them.

The scientists used a sound pressure meter to record sound decibel (dBA) levels throughout the three-hour long concert, and found that the magnitudes averaged over 100 dBA for 10 of the 26 songs played. These levels far exceeded the noise limits set by the Occupational Safety and Health Administration (OSHA), which define what decibel and exposure levels are allowable in the workplace. In fact, the magnitudes recorded at the concert would have violated OSHA limits within 30 minutes.

When asked after the concert, 53.6 percent of teens stated that their hearing was less clear than it had been before, while 25 percent stated that their ears were experiencing a ringing sensation known as tinnitus. The majority also suffered a decrease in the Distortion Product Otoacoustic Emissions (OAE) test, which measures the function of outer hair cells in the inner ear. These cells are crucial to hearing normal and soft sounds and understanding speech and are also the most vulnerable to noise damage.

These statistics are of even more importance to researchers due to the fact that hearing loss amongst adolescents has been becoming more prevalent. According to the United States National Health and Nutrition Examination Survey (NHANES), there has been a 31 percent increase in slight hearing losses in teenagers from 1988 to 1994 compared to teenagers in 2005 to 2006.

“It means we definitely need to be doing more to ensure the sound levels at concerts are not so loud as to cause hearing loss and neurological damage in teenagers, as well as adults,” said Derebery. “We have the responsibility to get the sound levels down to safer levels.”

Some teenagers were on the fence in relation to the study.

“Although I wasn’t too surprised with the results, I still think we should work to preserve our hearing,” said Ryan Leou, Irvine High sophomore. “I probably still wouldn’t wear earplugs at a concert, but I would still try to avoid listening to music too loudly.”

Others stated they were concerned with the findings, although they were worried more about other hearing detriments.

“To be honest I think earphones are the worst for children’s hearing,” said Anni Luong, another Irvine High sophomore. “A concert is only a couple hours, but kids wear earphones for the whole day. But since it says that even a concert can have these effects– and I’m joining Drumline– I would probably use earplugs.”

Derebery and other House Research Institute physicians presented the results of the study at the April 2012 meeting of the American Otologic Society. They will be published in the next issue of the magazine Otology & Neurotology.