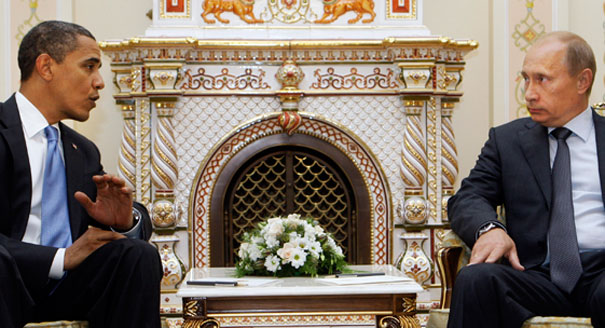 Russia’s Vladimir Putin and U.S. President Barack Obama met on June 18 in Mexico to discuss a solution to the Syrian crisis.
The two met for the first time since Putin’s reelection, and both parties have agreed that the violence must end immediately.
However, both sides are at odds with each other on how to solve the situation.
Both the U.S. and Russia agree toppling the Syrian regime is not the answer, but Russia is reluctant to work with U.S. propositions, striking down U.S.-backed UN resolutions regarding the Syrian crisis. There has already been reports of over 50 deaths in Syria, and major gunfire in certain regions such as Homs.
After a two hour meeting, held on the sidelines of the G20 summit being held in Mexico, Putin announced that both sides had agreed on some common points, stating that both sides were willing to work with other entities to bring a stop to the violence.
Both parties also called for Iran to follow international restrictions on nuclear programs, which has been under mass media scrutiny for the past several months.
However, reports state that the meeting was forced and stiff, and the two “did not even share a smile”.
Unconfirmed reports from various news sources such as CNN state that Russia has plans to send two ships to Syria, in order to protect its property and citizens in the area.
However, the two sides have yet to reach a viable solution to a stop to the violence.
“I think it’s just so childish that the two sides have been circling the problem, issuing statements of no consequence, [doing] everything possible except confronting and solving the problem,” says Robin Kim, a sophomore at LACES. “[We] need to step up and protect the people of Syria.”
However, a solution does not appear to be the world’s top priority. With major topics in the G20 summit being the global financial crisis, as well as the state of the euro, Syria and its problems are yet to be discussed in the world arena.
One student believes that the U.S. should advocate for more action in Syria.
“I get that our economy is in trouble,” says Irene Lim, a junior at LACES, “but people are dying. And that is simply not acceptable.”

1 thought on “RUSSIA AND US SEEK PEACE IN SYRIA, NEGOTIATIONS “FORCED””