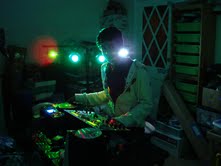 Most people who attend school dances and parties usually don’t give much thought about the DJ music. But for Pablo Fernandez, a freshman, one small thread of curiosity would lead to a new-found passion.
Two years ago, Fernandez got his first glimpse into DJ music. He attended several school dances and events throughout middle school. But unlike most others, the DJ music soon took a gradual influence on him.
“I was inspired by profession DJs. I thought being a DJ would be an interesting hobby. I wanted to be able to mix like they did, and I thought it would be fun to do”, Fernandez said.
Only last year did Fernandez learned the ropes of professional DJ mixing. To start off, he installed professional DJ equipment in his room. Not only did he purchase turntables and a mixer but also strobe lights and a fog machine, so he could also synchronize light shows with his music. He then learned some skills from a professional DJ who knew a friend of Fernandez, but even so, Fernandez was mostly taught himself how to mix. His parents were very receptive to the new hobby, despite the financial costs it entailed.
“The whole thing actually cost about $3,000, but my parents allowed me to get the equipment as long as I promised to pay the whole thing off by myself ”, Fernandez said.
He was able to pay off the whole debt through DJ performances. He has performed for only four months as a self-employed DJ, but so far has serviced birthday and holiday parties. But what he aspires to do some day is to DJ for a school dance.
“Although I don’t have any plans of performing for a dance any time soon, I would like to do so in my Junior or Senior year,” Fernandez commented.
Whenever he is not busy with homework or with his DJ job, Fernandez practices his mixes and transitions about four hours a week. But even though he enjoys his part-time job, Fernandez treats his DJ performing as a hobby over a life passion, practicing out of interest and pleasure over diligence, and intends to keep it as a hobby.
Fernandez explained, “I plan to DJ sometime in the future, but only as a hobby or part-time job. I’m planning to go into engineering as a field of study.”
Fernandez hopes to continue and expand his DJ performing. Currently, he is creating his own website, DJmyevent.com, which will be completed within a few months. The date is not yet determined.
When asked what makes being a DJ so rewarding, Fernandez replied, “It gets me pumped up and energized when I do remixes and shows. I really like getting that feeling every time I DJ.”