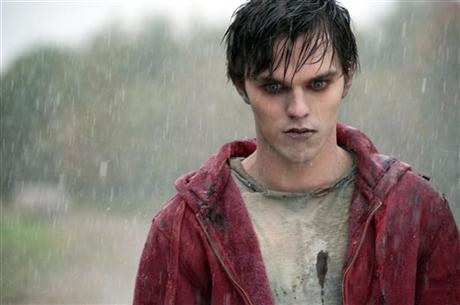 Based on Isaac Marion’s popular 2011 novel, “Warm Bodies” is a new film that combines elements of romantic comedy, horror, and Shakespeare. The film has done well at the box office, but is it good? Below, two student reporters offer different takes on the Jonathan Levine-directed flick.

Summit Entertainment and Lionsgate’s “Warm Bodies” is shaping up to be a box office hit, having earned $20 million in its opening weekend despite competing for attention with the Super Bowl.

Referred to as a “rom-zom-com,” the teen movie is a mix of love, horror and humor. “Warm Bodies” is a stirring tale that revolves around the relationship between R, a zombie played by Nicholas Hoult, and Julie, a young girl played by Teresa Palmer.

The film takes place after a zombie apocalypse. Much of the human world is destroyed and abandoned, leaving only small enclaves of human survivors to combat the zombie hordes.

“The whole setting of the movie really appealed to me,” said filmgoer Kevin Lee, 15. “How the movie takes place in such a fascinating environment is what really gets to me. The movie graphics, [such as the use of computer graphics], were definitely a plus.”

The movie begins as R and his friend M (Rob Corddry) attack a group of humans as they attempt to recover supplies from abandoned buildings. After eating her boyfriend’s brains, R begins to develop romantic feelings for Julie – one of the humans. R takes Julie back to his home and soon a relationship develops that causes R to slowly come back to life.

“The storyline of the movie was really interesting,” viewer Anni Luong said. “It was a cute, yet captivating way to keep the audience at the edge of their seat. I loved how the movie was from the perspective of a zombie. It was a real change from the type of love story that you see in theaters today.”

“Everything about the movie was just charming,” Luong said. “I would watch it again any day.”

Despite a strong performance from actor Nicholas Hoult, Jonathan Levine’s “Warm Bodies” is funny but lacking in meaning.

Unknown causes have turned most of the human population into zombies who kill without remorse, thereby creating more zombies. R, portrayed by Hoult, is one of these creatures.

When R and several other zombies attack a group of people, he eats the brains of Perry (Dave Franco) and experiences his memories. He thus finds himself in love with Perry’s girlfriend, Julie (Teresa Palmer). To protect her, R takes Julie to his home in a deserted airport. Here, she discovers that he is different from other zombies. R wants to interact with others and feel emotions, and he thinks a lot about how he can do so.

R and Julie quickly develop feelings for each other, but the pair faces a Shakespearean dilemma: Julie‘s father is General Grigio (John Malkovich), whose job is to kill zombies.

Hoult’s execution in his role as R is brilliant. He slouches just far enough to seem comical but not overdone and delivers his lines with a loveable dorkiness that aptly matches a zombie’s rustiness with normal human actions.

His internal mutterings humorously correspond to the concerns of average people — getting out in the sun more and standing up straighter — and reveal his humanlike desire to appeal to Julie. ”Don’t be creepy,” he mutters as he beholds her,  “Don’t be creepy. Oh, man.”

Despite this strong performance, however, there is no insightful message in “Warm Bodies.” Instead of delving deep into the characters’ complications, the plot glosses over them. For example, Julie has almost no qualms about falling in love with a zombie that ate her boyfriend. The only explanation for this is the trite old adage that “love conquers all.”

Though the plot follows “Romeo and Juliet” with appropriate sci-fi alterations, it does little more. As the movie progresses, its heart merely becomes warm. It never starts beating.

Hi! I’m a sophomore at Irvine High School and I enjoy writing, reading and playing tennis!

Christina loves writing! She’s a fifth-time JSR student editor and the Front Page and News Editor of The Northwood Howler. She’s attended various camps like the Medill-Northwestern Journalism Institute and several JEA competitions. She also interns for The Orange County Register and offers writing tips on a blog.