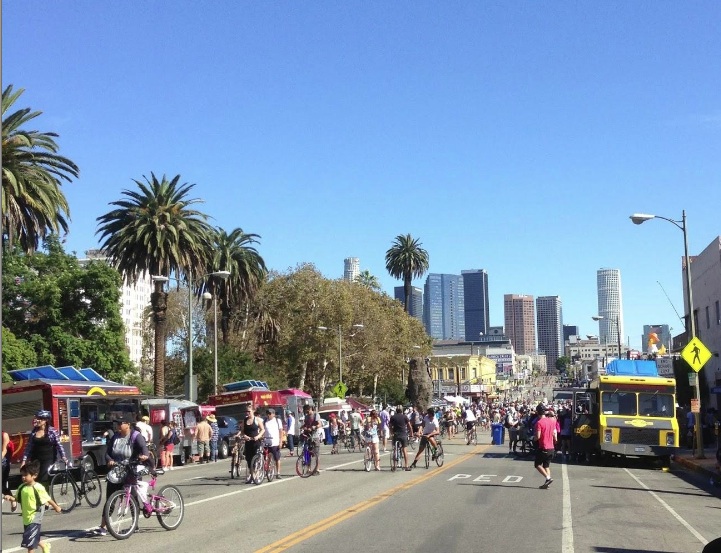 On Oct. 6, many Angelenos took part in CicLAvia: Heart of LA, an event filled with bicycling, jogging and other family-friendly activities covering the neighborhoods of Westlake, Chinatown, Boyle Heights, South Los Angeles, Piñata District, Fashion District, Little Tokyo and the city’s historic core. From 9 am to 4 pm, cars were banned from the 7.5 mile route.

On the route, there were several hubs at which people could listen to live music, purchase food and beverages and take memorable photographs. The Mariachi Plaza Hub presented Zumbathon and had food trucks. The Macarthur Park Hub provided music by Exitos 93.9 FM while actors dressed as the Power Rangers posed for picture opportunities with children. The African American Firefighter Museum Hub offered tours throughout the day, the Chinatown Hub offered ping pong and the Grand Park Hub provided a bike rodeo in which children could learn more about bike safety.

Participant Alex Nam explained that he “wasn’t able to see the solar-powered DJ set, but just biking with [his] friends was so much fun.”

According to participant Jin Kim, it “was an amazing opportunity for families to hang out, especially because the weather was great!”

Heart of LA exposed some people to parts of LA they had never seen. One of these visitors, Sharon Gi, was glad to learn about the “The Piñata District” in Downtown where creative piñatas or party goods are abundant..

Heart of a LA is the city’s seventh CicLAvia, a series modelled after the Ciclovías started in Bogotá, Colombia over thirty years ago. According to CicLAvia’s website, its goals are “connecting communities and giving people a break from the stress of car traffic.”

This year’s event did exactly that, bringing together people of all ages to come spend a day of fun under the beautiful sun.