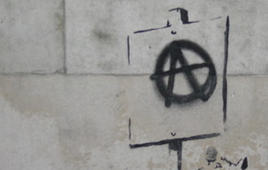 Banksy is a popular contemporary graffiti artist whose work work is seen differently by the many people who view it.

Banksy, who certainly holds strong opinions about today’s society no matter how people decipher the artist’s anonymous work, was recently back in the news after embossing controversial picture on the Israeli West Bank wall that separates the Palestinians from the Israelites. The graffitist portrayed nine distinctive pictures, two of which included a picture of a girl floating on balloons and an illustration of a large hole in the wall to the other side.

JSR spoke to several students to get their opinions on Banksy’s work, including a piece in Los Angeles that exhibits the word “Parking” on a wall in a parking lot. The “-ing” in the word is purposely faded, and a little girl swings from the letter A.

Another popular work by Banksy presents a homeless man sitting down while holding a sign that says, “Keep your coins. I want CHANGE.”

“I think this picture demonstrates how people are so caught up with money, but this particular man doesn’t want the money. He wants the people and the world to change,” explained ninth grader Anna Park to JSR.

Banksy has also depicted a young man participating in the javelin-throw for the Olympics. Yet, instead of a javelin, he holds a missile. Eighth grader Minjoon Kang told JSR that he believes the picture is a judgment on today’s nuclear crisis.

Banksy’s depictions are open to any interpretation because the artist does not deign to tell viewers what they mean. An interesting fact about this remarkable character is his anonymity. The artist has not not revealed to public his or her real identity, which is extremely difficult in this technological age. Possibly, Banksy remains unknown because of the controversy the artist’s work provokes.

Banksy, although mysterious, certainly looks at the world from a different perspective than many other people. While this viewpoint is not necessarily right or wrong, people can definitely learn from the work and the uncommon angle Banksy takes in representing society.