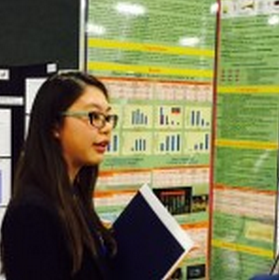 Winners compete for monetary scholarships as well as prestige, and seven ISEF alumni have gone on to win Nobel Prizes. Established by the Society for Science & the Public in 1950, ISEF has been sponsored by Intel since 1997. Intel has also been a longtime sponsor the Society’s Science Talent Search (STS), but it announced earlier this month that it would no longer be supporting that project.

After competing in the Orange County Science and Engineering Fair, Lee was selected to participate in the international fair, which was held in Pittsburgh, Pennsylvania from May 10-15. Though she did not receive an award in Pittsburgh, she described the fair to JSR as “absolutely stunning.”

According to Lee, whose project focused on a novel method for removing heavy metal from aqueous environments, “It was inspiring to see projects and people come from all over the world and gather in one place.”

When asked about what she learned at the fair, Lee said, “I wish to emphasize the fact that anything can be done.”

She continued, “Sometimes, success seems to run away from you, sliding through your grasp, and you feel that you are drifting further and further away from your ultimate goal. However, you must remember that success is known for slapping you in the face at random times. Nothing grand, nothing amazing – Just a slap and a realization that, ‘Oh yeah, so I can do that.’”

Many view programs like ISEF and STS as intimidating competitions in which only geniuses are allowed to compete. However, all participants start at the same starting point with a question to be answered. No matter the results, participating in such prestigious events allow for a greater gamut of experiences – whether it be sending out hundreds of emails to various professors and receiving replies, working in a kitchen or a professional lab, or even meeting with the president in the White House.

Ultimately, what is important is taking the leap of faith to conquer fears of inadequacy and and seek new avenues of opportunity.

Heejin Koo is a freshman at Woodbridge High School who is intent on exploring new opportunities, traveling and debating current issues.