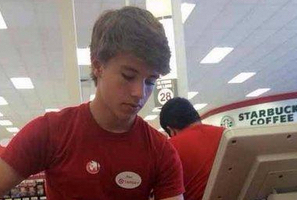 At the beginning of November, 16-year-old Alex Lee was a normal teenager working at a Target store in Texas. Yet on Sunday, November 2, Lee became a national star and his Twitter and Instagram followers ballooned in only a couple of days. Now he has appeared on TV with Ellen Degeneres and has become a spokesperson for the emerging selfie-sharing application Shots.

That Sunday, a teenage girl from Alex’s school took a picture of Alex working at Target and uploaded it to Twitter with the caption “YOOOOOOOOO.” The casual picture of Alex bagging groceries at Target became a worldwide obsession in minutes, as teens who found him attractive began retweeting the tweet and the #AlexfromTarget hashtag was born.

Manlius Pebble Hill freshman Paul Murray explained this Twitter explosion to JSR, saying, “I opened up Twitter after coming back from basketball practice, and everything – I’m telling you, every single post – was about this Alex from Target. I seriously had no idea [what was happening].”

Lee, who was still working at the register as the meme surrounding him went viral, had absolutely no idea about his new celebrity status. Only when the teen turned on his phone that night did he become aware of the growing fame that would change his life.

Over the next few weeks, Alex was flown to Los Angeles, interviewed by major media companies, and called “hot” by Degeneres.

However, not everyone is happy with the explosion of #AlexfromTarget.

Caroline Shieff, a senior at Manlius Pebble Hill, told JSR, “This entire incident just proves how dumb teenagers can be. The guy literally bagged groceries at Target, and look what he’s become. Not only Twitter, but just the entire social media business exaggerates everything and makes [it] a big deal.”

Shieff has a point; #AlexfromTarget certainly demonstrates the power of social media. The rapidness and free-flowing nature of Twitter made #AlexfromTarget possible, and the interactive chain of retweets made it so there was no going back once the picture of Lee was uploaded.

Although online social media came into being relatively recently, it has become much more than just a social playground. Now, applications such as Twitter, Facebook, and Instagram facilitate the sharing of massive content across a network connecting people regardless of ethnicity, religion, ideology, or politics. #AlexfromTarget reminds us that immediacy and accessibility are the very building blocks of social media.

Lived in Korea, Singapore, Oregon, California, now New York. I enjoy striking up interesting conversations with interesting humans. I attend John Jay High School and will be a senior in the upcoming fall.