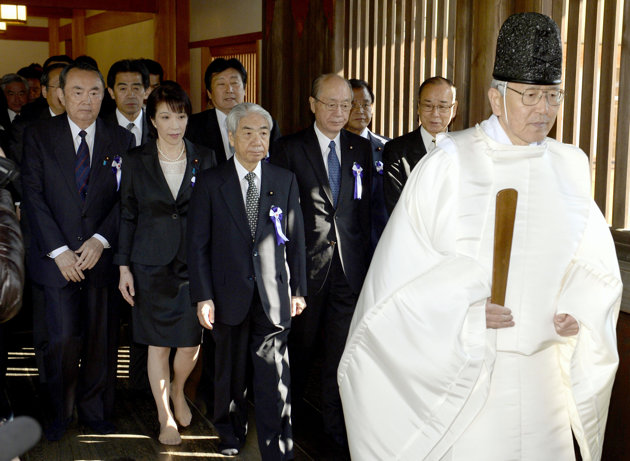 The Yasukuni Shrine was created in 1869 by Emperor Meiji in Tokyo to commemorate those who died in service of the Japanese Empire. The Shinto shrine lists the names of over 2 million people who died during the Meiji Restoration, from the 1867 Boshin War to World War II. The list of people commemorated at the shrine includes over 1,000 people who were convicted of war crimes by Allied military tribunals after World War II. Fourteen of these individuals were war leaders and convicted for “crimes against peace.”

The enshrinement of such war criminals is a religious gesture to absolve them of any crimes or evil acts. Thus, the annual visit and worship of Yasukuni Shrine by Japanese politicians has long been a source of controversy in East Asia. Countries that were under Japanese occupation during World War II, such as China, Taiwan and the Koreas, see the visits as Japan’s glorification of its imperial past.

However, the shrine holds cultural significance in Japan. According to Kent Yamada, a Japanese American high school student, the shrine “represents the long tradition and history of Japan and is a source of pride for many Japanese.” Also, the shrine not only honors people of Japanese ethnicity but also Chinese or Koreans who served Japan.

Despite its cultural importance to Japan, the Yasukuni Shrine may undermining regional diplomacy for Japan and its neighbors. According to South Korean President Park Geun-Hye, “it is unlikely for there to be a forward-looking relationship between South Korea and Japan as long as Japan does not rectify its historical understanding.” South Korean Prime Minister Yun Byung-Se canceled a planned visit to Japan following this year’s shrine visits.