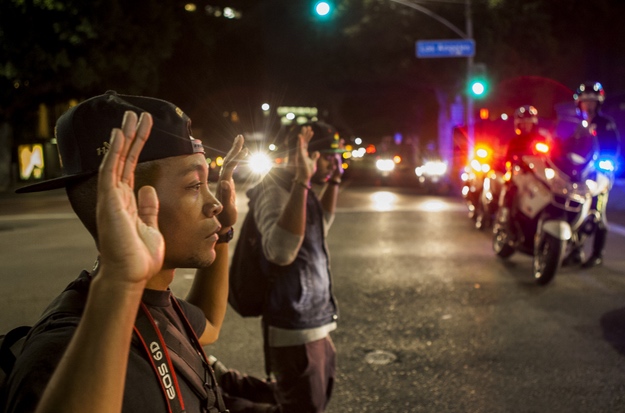 On November 24, St. Louis County, Missouri’s prosecuting attorney Robert McCulloch reported that a grand jury had reached a decision not to indict Darren Wilson, the police officer who killed unarmed teenager Michael Brown in the town of Ferguson this August. Since then, citizens have been protesting that death case as well as several other similar killings by police that have occurred around the country and have also not been met with indictments, including the choking death of Eric Garner in New York and John Crawford III in Ohio. Many protesters believe the killings are related to the dual issues of racism and unchecked police authority.

There have been many demonstrations of civil disobedience since the Ferguson decision, including several that have taken place in Downtown Los Angeles. JSR spoke about the unrest with several participants who protested in LA in late November.

“My group started around Regal Theaters, near the Staples Center, on Olympic-ish, and we made our way to around Hope Street, and then back again,” said teenage protester Alonzo, a junior from Burbank High School, when asked by JSR how he proceeded during the protests.

“People,” he said, “were even doing things like lying down on the ground and recreating how [Brown’s killing] went down… I was lucky enough to not get arrested, because I don’t think I was doing anything too crazy. I swear I saw like a hundred people get arrested…”

“It was crazy,” he reflected during the interview. “Both sides even showed a little violence at certain points.”

The number of arrests reached 183 during the first night of protests. However, despite reports of violence, no real harm was done to either protesters or police officers as a result of aggression.

“I don’t know about anybody really getting hurt by the police or anything, but people who were angry were getting up on police cars and [civilian] cars and stuff,” said Culver City High School student Jane Sekiyoba when asked about the types of violence she saw as she was protesting.

“But the possibility was definitely there,” she added, “because everything was just so hectic and people were tripping on their feet trying to avoid arrest and stuff.”

Despite no reports of actual violence occurring at the scene, ABC 7 News reported that police officers found a switchblade, pepper-spray, and “a rope with metal pieces attached to it” during the arrests.

“I’m not for all that violence or people getting hurt, but… I think it’s important that we get our point across, you feel me?” said Sekiyoba.

“We’ve got civil rights and natural rights and all these rights and stuff, but… I feel like we got to give this country a wake-up call, saying that we’re not just okay with sitting here and our rights being breached,” she continued, explaining her motivation for joining the protests. “The government doesn’t understand our response? That’s just the government making it clear once again that it doesn’t understand our pain either.”

Almost a month after the decision, Michael Brown and the others who have been killed are still in the hearts and minds of people all across America. Protests of many varieties continue to be held at workplaces, public institutions, sporting events, and schools throughout the nation.