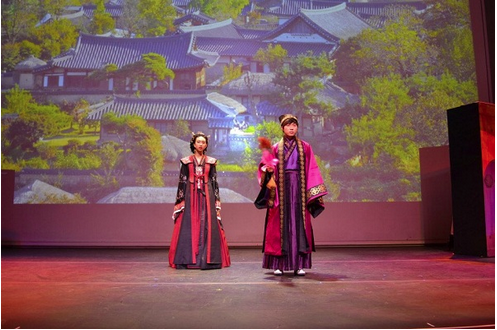 On March 20 and 22, the Korean Culture Center presented a fashion show, “Hanbok: Mesmerizing Beauty” which featured more than 200 costumes designed by renowned Korean designer Hyun-Sook Lee in The Getty Museum.

The fashion show featured replica costumes from Korea’s Three Kingdom Period (57 BCE) to the modern day. It also included Korean clothing from the Koryo and Chosun dynasties which are thought to have been worn by a figure in Peter Paul Rubens’s famous drawing “Man in Korean Costume.” Hanbok from the Three Kingdom Period, such as Queen Sunduk’s costume, were the most elaborate. As time periods passed, Hanbok became simpler and easier to wear.

Hyun-Sook Lee, one of the most sought-after costume designers in Korea, stated, “Hanbok has changed a lot over the years. The show is intended to showcase this change.”

In order to spread awareness of Korean culture, this fashion show also included dynamic performances of Tae Kwon Do and sounds of the traditional Korean percussion ensemble. It was broadcast on national Korean television networks such as MBC, KBS, SBS and YTN.

The unique part of the fashion show was that it provided opportunities for students to work as models. High school volunteer students and college students from Han Seo University gathered before the show to rehearse walking like models.

Ashley Lee, a volunteer from Diamond Bar High School said, “Volunteering as a model in this fashion show was such a great experience. I realized Hanbok’s beauty and its vibrant colors.”