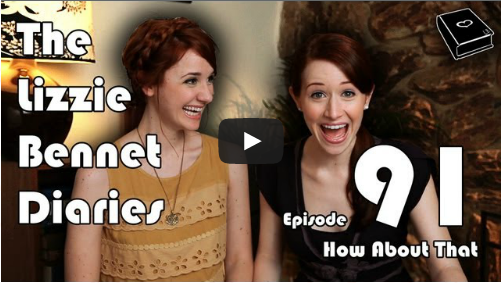 Pride and Prejudice, the classic novel by Jane Austen, continues to be revisited with  film adaptations and fan fictions. One of those adaptations, the Lizzie Bennet Diaries, stands out as a radical departure from traditional forms of storytelling.

Pride and Prejudice chronicles the love story of Elizabeth Bennet, an outspoken woman from a modest family, and Mr. Darcy, a rich aloof gentleman with a hidden soft heart. They overcome initial prejudice and differences in class to realize their affection for each other. The novel’s popularity stems from its likeable characters and message that love can overcome social circumstances. The Lizzie Bennet Diaries brings the novel’s themes into the modern world in relatable context.

The show is a series of online Youtube videos that are supposedly the videologs (vlogs) of Lizzie Bennet, a Californian graduate student and the modern incarnation of Elizabeth. Developed by Youtube personalities Hank Green and Bernie Su, the show combines storytelling and social media.Viewers are able to experience Pride and Prejudice on online platforms that they use on a regular basis. For example, they can ask questions or follow Darcy on Twitter. Thus, they become active participants in the show.

“The Lizzie Bennet Diaries revolutionizes storytelling. The characters have their own Twitters, Tumblrs and Facebook accounts, which not only further immerse the viewers into the story but also reach out to a world dominated by social media,” said Suzanne Chen, a high school student who is an avid reader of Jane Austen and also a Lizzie Bennet Diaries viewer. “Because the boundary between the story world and our world has been blurred, the characters become real people whose dreams and conflicts matter to us. Even though we know the ending to the novel, we are still so invested in the outcome.”

The Lizzie Bennet Diaries Youtube channel currently has over 190,000 subscribers and a significant fan base.  The show’s success brings hope for a bright future in Web-based storytelling.